Josh Brolin Says He 'Tried Heroin', Was On A 'Destructive Path' 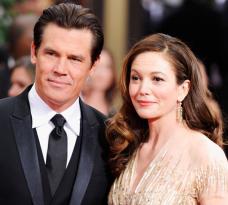 In an interview with The Guardian, Josh Brolin opens up about his struggles with substance abuse and the "destructive path" he was on last year.

"I tried heroin," Brolin admits. "That sounds so horrible when you put it like that. But yeah, I tried heroin. I mean, I never got into it and I never died from it, which is a good thing. I've had 19 friends who died. Most of those guys I grew up with, they're all dead now."

Brolin says he used to rob cars for drug money: "It was Santa Barbara. It was the '80s. It was punk rock. You either had the children of rich, neglectful parents or children of poor, neglectful parents, so it was a mix. But we basically grew up the same way. I've never seen a group like that before or since."

Brolin was arrested on the streets of Santa Monica for public intoxication in the early hours of New Year's Day 2013. A month later his marriage to Diane Lane ended after eight years.

"Well, it was another turning point," he says. "It made me think of a lot of things. My mum dying when I was in my 20s. All the impact that had on me that I hadn't moved past; I was always such a mama's boy."

"But I realized that I was on a destructive path. I knew that I had to change and mature. It was like I stepped back and saw the hamster wheel."

"I used to think you should try to deconstruct everything. Experience everything. Just get yourself out there. But I don't believe that anymore. Having adventures is all very well, but an imagination can make up for all that. That's the more intelligent way to be. And it keeps you out of harm's way."