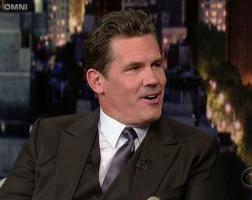 Josh Brolin shares a laugh with David Letterman about Joaquin Phoenix's appearances on the 'Late Show'.

The following morning the actor said on 'Good Morning America' that he made up the entire story to make the interview more exciting.

"Because a while back he was on the show in a beard and that wasn't true," said Brolin.

"So basically he comes on your show, he's lying to you."

"Apparently so. Which is fine, you're not under oath," laughed Letterman.