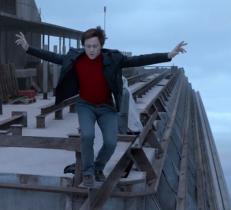 Sony has released an impressive five minute IMAX trailer for 'The Walk'.

Based on a true story, the film stars Joseph Gordon-Levitt as Philippe Petit, the French high-wire artist who attempted to walk between New York's Twin Towers on a tightrope strung between the two buildings in 1974.

With little more than nerve and blind ambition, Petit and his ragtag crew attempt to complete the illegal walk with physical obstacles, betrayals and close calls thrown in to execute their plan.

'The Walk' has a release date of October 9 and September 30 in IMAX.