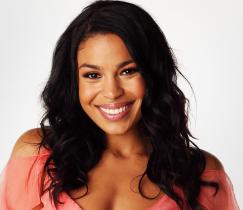 Jordin Sparks delivered her own message while singing the national anthem before the Dallas Cowboys took on the Arizona Cardinals on Monday night.

The 27-year-old singer wrote Bible verses references on her hands so the audience could know exactly where she stood without saying a word.

Sparks referenced "31: 8-9" from the Book of Proverbs, which reads: "Speak up for those who cannot speak for themselves, for the rights of all who are destitute. Speak up and judge fairly; defend the rights of the poor and needy."

Both the Dallas Cowboys and The Arizona Cardinals dropped to one knee before standing and locking arms for the anthem.

"They were very much aware that statement, when made or when attempted to be made in and a part of the recognition of our flag, can not only lead to criticism but also controversy."

"It was real easy for everybody in our organization to see that the message of unity, the message of equality was getting, if you will, pushed aside or diminished by the controversy. We even had the circumstances that it was being made into a controversy."