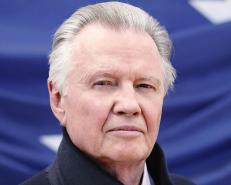 Jon Voight doesn't think Penelope Cruz and Javier Bardem should be criticizing Israel over the conflict in Gaza.

In an open letter, Voight calls the couple "obviously ignorant" and warns that their stance could bring about anti-Semitism.

"I am more than angry, I am heartsick that people like Penelope Cruz and Javier Bardem could incite anti-Semitism all over the world and are oblivious to the damage they have caused," Voight writes.

"After years of trying to make peace, the wars they had to fight, being attacked by their enemies, and still being attacked, and finally after years of running into bomb shelters and having hundreds of civilians killed by suicide bombers, civilians being killed in their sleep, stabbed to pieces, finding enough is enough and finally retaliating, instead of my peers sticking up for the only democratic country in that region, they go and take out poison letters against them."

"I am asking all my peers who signed that poison letter against Israel to examine their motives. Can you take back the fire of anti-Semitism that is raging all over the world now?" Voight continues.

"You have been able to become famous and have all your monetary gains because you are in a democratic country: America. Do you think you would have been able to accomplish this in Iran, Syria, Lebanon, et cetera?"

"You should hang your heads in shame. You should all come forth with deep regrets for what you did, and ask forgiveness from the suffering people in Israel."

After being criticized for signing the letter, Cruz and Bardem said their signatures were "solely meant as a plea for peace."

"I'm not an expert on the situation and I'm aware of the complexity of it," Cruz said. "My only wish and intention in signing that group letter is the hope that there will be peace in both Israel and Gaza."

"I am hopeful all parties can agree to a cease fire and there are no more innocent victims on either side of the border."