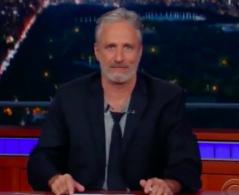 After Stephen Colbert begins to cover Fox News chairman Roger Ailes leaving the network, Jon Stewart takes over his desk to rail on Fox News and Sean Hannity's complimentary coverage of Donald Trump, contrasting it with criticism of Barack Obama for the same reasons.

Stewart calls Hannity "Lumpy" and concludes: "So here's where we are, either Lumpy and his friends are lying about being bothered by thin-skinned, authoritarian, narcissistic, less than Christian readers of teleprompters being president or they don't care."

"As long as it's THEIR thin-skinned, authoritarian, narcissist. You just want that person to give you your country back. You feel that you're this country's rightful owners," says Stewart.

"You don't own patriotism, you don't own Christianity, you sure as hell don't own respect for the bravery and sacrifice of military police and firefighters. Trust me, I saw a lot of people at the convention with their Blue Lives Matter rhetoric who either remained silent or actively fought against the 911 first responders bill reauthorization. I see you."