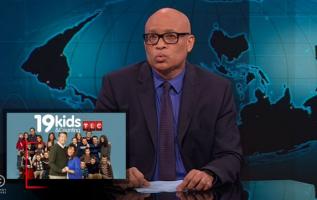 "I just decided to stop by and tell you, I love you," Stewart, a producer on the show, said to Wilmore as the audience cheered.

"What you, my friend, were tasked to do, you have done and done beautifully. You gave voice to underserved voices in the media arena."

"It was a show that was raw, and poignant and funny and smart and all of those things and you did it from scratch."

"Do not confuse cancellation with failure," he told Wilmore.

'The Nightly Show' ran for 19-months but was cancelled by Comedy Central after never being able to reliably keep its 'Daily Show' lead-in audience.