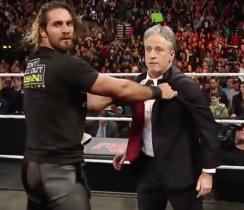 Jon Stewart was body slammed by John Cena on 'WWE Monday Night Raw' a day after he smashed a chair into John Cena's midriff in a sneak attack.

The former 'Daily Show' host tried to explain away his shenanigans on Monday Night Raw but Cena wasn't having any of it.

On Sunday night, Stewart had joked that he had "spent the last 16 years talking about politics, it's nice to be back in reality."