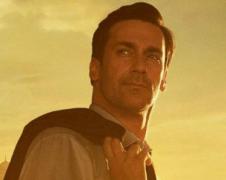 Jon Hamm must not be a Belieber.

The 'Mad Men' star slams the pop star in an interview with Men's Fitness as he talks about the problem with young Hollywood.

Hamm says some stars need "a mom or a dad or a really good friend who can say, 'Hey, s--thead!'"

"You see people in the world and you're like, 'Do you know how a washing machine works? Do you know how to wash a dish?' Life skills are something we're missing... just s--t you needed to learn in life."

Hamm also addresses the constant rumor that he like to go commando as often as he can.

"Would you want people walking up to you and pointing at your d--k? I can't believe I'm still talking about this," he says. "But I've worn underwear every day of my life and the fact that I'm painted as this exhibitionist is a little annoying."

"Being someone who people want to photograph, you have to open yourself up to the positive and negative. It is what it is. If I get mad at it I'll look like a douchebag. But it's silly."