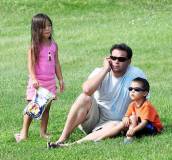 According to Berks County, Pennsylvania court documents, the 35-year-old owes the money from 2009 -- the same year he split with wife Kate Gosselin.

Most of the tax stems from the extra money Jon earned that year from paid appearances and interviews about the couple's much-publicized split.

Gosselin admitted to financial problems last year after his acrimonious divorce from Kate.