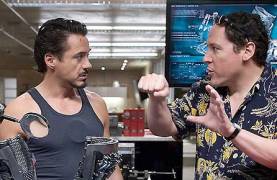 Jon Favreau has announced he will not direct 'Iron Man 3' for Marvel Studios.

"I'm directing Magic Kingdom, not Iron Man 3," Favreau says in a statement. "I've had a great run with Marvel and wish them the best."

In an interview with the Los Angeles Times, Favreau explains that he's not leaving 'Iron Man' due to money issues or lack of cohesiveness, but to "find something that lights a fire" and "blow people away, which is easier to do with a project that isn't loaded with built-in expectations."

"Marvel and I both came of age together," he continues. "The years that we shared were a pivotal experience. Marvel's Kevin Feige has a firm grasp on the many franchises and how they all interweave and I am happy that I had the opportunity to establish the world that these characters can now play in."

"'Iron Man' has given me tremendous opportunities and Kevin and I are enjoying a lot of momentum in our careers thanks to the films. I look forward to seeing what others can do playing in the same world."

The move comes after Favreau recently hinted that he didn't really know where to go with the third film in the franchise, which currently has a May 2013 release date.

"In theory, 'Iron Man 3' is going to be a sequel or continuation of Thor, Hulk, Captain America and Avengers," he said. "That whole world... I have no idea what it is. I don't think they do either, from conversations I've had with those guys."

"Honestly, right now 'Captain America' and 'Thor' are Marvel's big priorities, and you learn things by shooting and making movies," he said. "The script is one thing, but when you actually see what you land on at the editing room — especially with Marvel where they film, cut, film some more and shape the film — you really learn as you go."