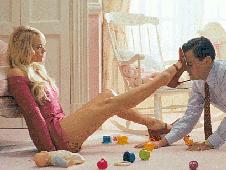 "Yeah," Bernthal said when asked if the movie was fun to film. "It's a dream come true and the thing about his set is that everybody there is the best at what they do."

"Everybody's so passionate, excited to be there. You know the woman who plays Waitress No. 4 is leaving set to go to her Broadway show. There's just so much talent there and I think that's why there's so much creativity. He's the best."

"That's funny, I did not get a call," quipped Conan.