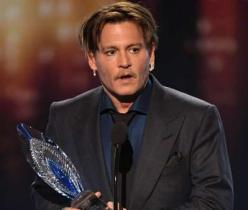 Johnny Depp thanked fans for their support as he made his first post-divorce public appearance at the 2017 People's Choice Awards on Wednesday,

"I came here for one reason tonight, for one reason and one reason only, for you, the people," Depp said as he accepted the award for Favorite Movie Icon. "Through whatever good times or bad you've stood by me and trusted me. Thank you."

"You very, very graciously invited me here once again tonight. So I appreciate that very much. You have no idea how much I appreciate it."

The 'Pirates of the Caribbean' recently settled his tumultuous divorce, after eight months of bitter back-and-forth, from Amber Heard (photos

He had been accused of allegedly physically and verbally abusing Heard during their marriage after she filed for divorce in May.