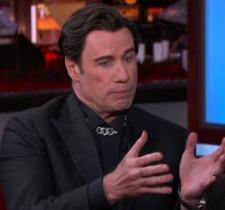 In his appearance with Jimmy Kimmel last night, John Travolta told the behind the scenes story about what caused him to infamously mispronounce Idina Menzel's name at the Oscars last year.

"The truth is, I was expected backstage and it was it was getting very close the time I was supposed to go on and suddenly a page, an assistant to you, grabbed me and said you're on in a in 1 minute in 15 seconds I said 'Really, what happened to 15 minutes?," explained Travolta.

"They didn't explain but later I found out that my actual page was stuck in an elevator and couldn't communicate to anybody."

"So then the, you know, backup page rushed to get me. As I get backstage, I run into Goldie Hawn. She's charismatic, sexy, beautiful got an mazing thing and I was starstruck."

"I'm starstruck hugging and loving her up and forgetting that I have to do this bit," he said. "And they said you're on. I said holy. They said 'By the way, we've changed Idina's name to phonetic spelling.'"

"So it was just phonetic spelling but I didn't rehearse it that way."

"So this was Goldie Hawn's fault," quipped Kimmel.