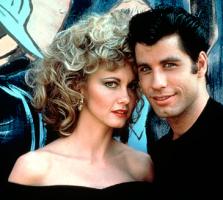 John Travolta and Olivia Newton-John have reunited for a holiday music video titled 'I Think You Might Like It,' although that may not accurately describe the video itself.

Travolta's wife, Kelly Preston, and daughter and son also appear in the video. Although John Travolta himself appears to be either wearing a bad hairpiece or went through his hair with a jet black marker.