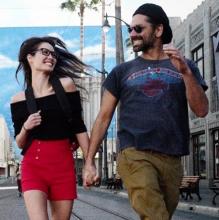 Stamos shared a fairytale-themed illustration to reveal the news: "I asked... she said yes!... And we lived happily ever after."

The 54-year-old actor and 'The Vampire Diaries' actress, who has appeared in a handful of other TV series, had been dating for more than a year.

Stamos was previously married to Rebecca Romijn from 1998-2005.