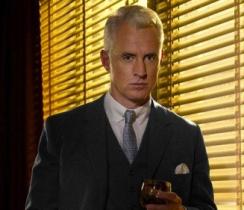 The star of 'The Front Page' on Broadway recounts what it was like to lose the gig, during desperate times, after being told he was the best man for the job.