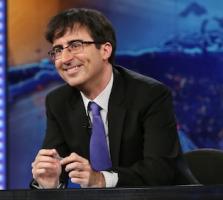 'Last Week Tonight's John Oliver looks at the topic of Scottish Independence on this day of reckoning for the Scotts.

Scotland began voting Thursday on whether to become independent, in a referendum that could break up the centuries-old United Kingdom and create Europe's newest country since the collapse of Yugoslavia.

Groundskeeper Willie from 'The Simpsons' also weighed in on the debate earlier this week.