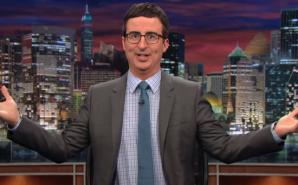 Singapore had hoped that its anti-gambling ad in which a despairing boy named Andy told friends his dad had bet his life savings on Germany would resonate with viewers.

Except Germany ended up winning the World Cup.

Singapore responded by filming a second part of the ad in which Andy told his friends that despite winning his "dad never stops... he wants to bet one more time."

But John Oliver imagines what Andy's dad shouldn't stop because he's on a hot streak.