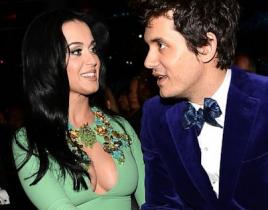 In an interview with the New York Times, John Mayer admits that his new song 'Still Feel Like Your Man' is about Katy Perry (photos

"Who else would I be thinking about?," he tells the paper. "And by the way, it's a testament to the fact that I have not dated a lot of people in the last five, six years."

"That was my only relationship. So it's like, give me this, people."

"There were times when tears came out of me, and I went, OK, John, this is not about an on-again, off-again relationship. This is something more profound," he expresses.

The pair dated on and off for nearly two years until early 2014. Fans had been speculating the song was about Perry.

The single's lyrics include "I still keep your shampoo in my shower / In case you wanna wash your hair / And I know that you probably found yourself some more somewhere / But I do not really care" and "Still like the letters in your name and how they feel, babe / Still think I'm never gonna find another you / Still like to leave the party early and go home, babe / And don't you know, babe / I'd rather sit here on my own and be alone, babe."

The song is from Mayer's new album ;The Search for Everything'.

Perry most recently dated Orlando Bloom. Although they're now broken up, at the time Bloom made quite a splash by paddleboarding naked with Katy Perry in Sardinia.