John Boyega's Friends Thought He Was An Extra On 'Star Wars: The Force Awakens' 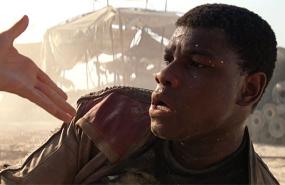 Since he had to keep his involvement in 'Star Wars' a secret for so long, John Boyega's friends thought he was an extra on the film.

The star also shared a nice clip of him partying with his friends at the London premiere and shared he would be surprising New York moviegoers.