Johansson: 'Black Widow' Spinoff Must Happen While I Can Still Wear Outfit 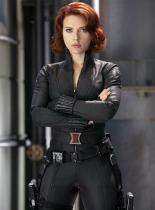 ) is all in for a 'Black Widow' spinoff but the actress says it needs to happen sooner rather than later.

"I would like for it to happen under the right circumstances," she tells Variety. "I think there's a lot of opportunity to mine that story line."

"She's got a really rich origins story. There's a lot of places you can go—you can bring it back to Russia. You could explore the Widow program."

"There's all kinds of stuff that you could do with it. You could really uncover the identity of who this person is, where she comes from and where she's part of."

"There's plenty of back-story. Or it could be something else. Where do the Avengers go? They are underground. What happens then? What happens after it all falls apart? There are so many ways you can go. I think it would just have to be very much like its own specific thing. It would have to have its own specific vibe."

"It would have been totally different than any of the other standalone films. I think if the fans wanted it enough, then it would probably become a reality. Marvel would know more than I do."

"If I did it, I'd have to do it while I still actually wanted to wear a skin-tight catsuit," she adds. "I don't know how much longer that's going to be."

Johansson made her debut in the Marvel films as Black Widow aka Natasha Romanova in 2010's 'Iron Man 2'.