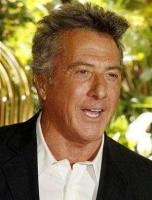 A jogger who suffered a cardiac arrest is crediting Dustin Hoffman for coming to his aid and saving his life.

Sam Dempster, 27, says he was jogging in London's Hyde Park when he collapsed just as the 'Rain Man' actor was taking a walk.

"I have no memory of what happened. The paramedics told me I had been saved by Dustin Hoffman," Dempster, who was taken to hospital and underwent surgery, tells 'The Sun'. "It's unbelievable."

Paramedic Martin Macarthur says Hoffman complimented them for a job well done after they resuscitated Dempster with a defibrillator.

"He was fascinated. He seemed impressed we'd got this guy back so quickly," says Macarthur. "When we were carrying the patient into the ambulance he walked up and said 'Great job, guys'. He really appreciated what had happened."

The stricken lawyer thanked medical staff and "my new found favorite celebrity Dustin Hoffman who called 999 and waited by my side until paramedics arrived" on his website.