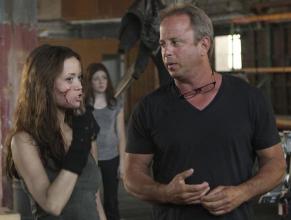 ) accused Joel Kramer of sexually molesting her while filming 'True Lies' when she was 12, two more women have accused the stunt coordinator of sexual misconduct.

Laura Albert tells Deadline she was working as a stuntwoman for Kramer when she invited her sister and her sister's friend to the set of 'Virus' in 1997. After a tour, she invited the pair, who were 15 and 16 years, for go-karting with the stunt personnel.

After go-karting, she claims Kramer "lured" the girls to go swimming at his hotel pool. Kramer allegedly "pulled his d*ck out and said, 'You cannot handle this' before swimming towards them.

Albert says she confronted Kramer the next day on set and he admitted he engaged in intercourse with the teen. However, he now denies it went that far.

A second stuntwoman alleges Kramer sexually assaulted her in the 1970s-1980s after he picked her up on their way to meet up with other stunt crew.

"I did not invite the two girls up to my room," he responds to Deadline. "One girl on her own came to my room as she was legal age... I was swimming laps one early evening and the sister of one of my stunt doubles and her friend showed up at the pool. I did not invite them."

"They swam around and I finished my laps and went up to my room alone. Period. You don't know me, but I am not a liar. Thirty minutes later there was a knock at my door and her friend was there and asked to come in. She came in and we fooled around but no intercourse. She left about 1/2 hour later."

"I honestly did not know she was 17. Tattoos, and yes, pretty. When I found out I was devastated. I also checked with the local laws and found out 16 was the consensual age. It bothered me for years," he claims. "Yes, all was consensual."

Calling it a "fabrication" and a "witch hunt," Kramer says: "It saddens me that now people will use me as their target of opportunity. Please do not take these at face value. I am sorry for this witch hunt."