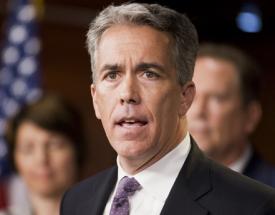 Former Congressman Joe Walsh is taking a hit on social media after remarking that he didn't care for what late night host Jimmy Kimmel had to say on Monday night.

Kimmel has received an outpouring of support after revealing in an emotional and tearful monologue that his newborn son, Billy, underwent heart surgery after a nurse noticed something odd with his heartbeat.

Of course, Kimmel, who makes millions of dollars a year, can afford the treatment but the comedian pleaded that every American should be afforded because healthcare because "no parent should ever have to decide if they can afford to save their child's life. It just shouldn't happen."

Former President Barack Obama applauded the host for his comments: "Well said, Jimmy. That's exactly why we fought so hard for the ACA, and why we need to protect it for kids like Billy. And congratulations!"

"Sorry Jimmy Kimmel: your sad story doesn't obligate me or anybody else to pay for somebody else's health care," he wrote.

"Health care is complicated. Health care is bankrupting America. But instead of thinking thru all of that, we'd rather cry with Jimmy Kimmel," he later added.

"Joe, you won't even pay child support for your OWN kids. We already knew you felt this way, you worm," responded actor and comedian Patton Oswalt. "No need to tell us — we're good,"

Walsh, who now does his own radio show, reportedly owes more than $100,000 in child support payments.

Chris Evans, Captain America himself, stayed true to his character and remarked: "It's fair to have opposing views on healthcare, but our humanity should guide us when, where and how to engage. This is beyond misplaced, Joe."