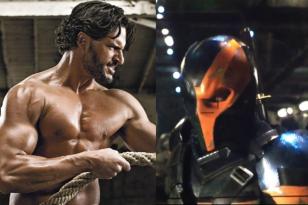 Affleck first teased fans about the villain last week. But now there's official confirmation about both the character and the actor behind the mask.

He wouldn't comment on whether we will see Deathstroke in a cameo in 'Justice League'. But with which is Manganiello currently in London, where the film is shooting, there is a good chance we will.

Interestingly, Manganiello was also rumored to be playing Deathstroke during early development of 'Suicide Squad'.