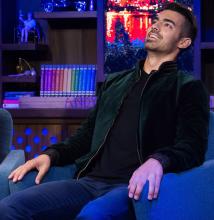 Joe Jonas offered was more forthcoming than his brother when Andy Cohen challenged him to play Marry, Shag, Kill on 'Watch What Happens Live' Thursday night.

Cohen asked him to choose between exes Taylor Swift (photos

After Cohen said he didn't know Jonas had dated Swift, the singer said: "We were children, 18, 19. Young enough."

He was also asked which Jonas brother was the most well-endowed. And surprisingly, he didn't plead the fifth.

He instead took the fifth when asked about a song he had written that was going to "piss someone off."

"The song is not going to be on the album," he said. "I'm going to save it for a side project possibly, maybe a B-side."

But he refused to reveal who the song was about.