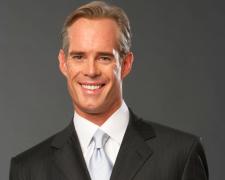 Buck then goes on to tell a story of him making a touchdown call while peeing into a garbage can in the booth.

Stuck in a broadcast booth when the Green Bay Packers played in an old stadium in Milwaukee with no bathroom in the broadcaster's booth, Buck faced a dilemma.

"First half is coming to a close. We're out of all the TV time-outs. And the half will not end. And I’m turning to people in the booth, taking my headset off going 'I've got to pee. I have got to pee!'"

With a 30-second break, Buck said, "the guy who is working with me hands me a little water bottle, like am I William tell? I'm going to shoot it in there? No, that's not going to work."

"I'm wearing this parka because it's cold. They then put a trash can in front of me. I've got 20 seconds. Then I get stage fright."

Buck was eventually able to overcome the stage fright but it was when the commercial break ended.

"Boom! Flood Gates open, and I start peeing. The problem was, play resumed, and I actually called a touchdown live on national TV while peeing in a trash can."