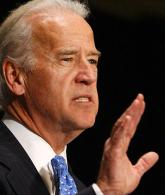 Vice President Joe Biden says the lewd comments made by Donald Trump that were caught on video illustrate textbook sexual assault and he calls it an abuse of power.

"First of all, what I found astounding is that he would so publicly, even though, no matter who he was talking to, that he would acknowledge that he engaged in the textbook definition of sexual assault," says Biden.

"He didn't say you know, 'I go up and I ask'. He said 'I go up and I grab, and can I do this.' And then I see in the paper today one of the pageants that he, I guess Miss Teen America. And the teen girls, there were three, four, five in the room, they were getting dressed, they were naked. He walked in and said, 'Don’t worry girls, I've seen all this,' and he stood there. I mean this is absolutely outrageous behavior."

"I've spent most of my career trying to figure out how to begin to change the culture in this country so that we treat women with respect and with dignity. I really mean it. I know that I get fairly passionate about this issue."

"Everybody asks why do I feel so strongly about this? Why did I write the act? Was it my mother? My sister? And thank God they weren't victimized. But my dad used to say the greatest sin of all is the abuse of power. And the cardinal sin of all is a man raising his hand, or taking advantage of a woman."

"And here's a guy who says, 'I'm a star.' Talk about power. 'I'm a billionaire. I'm a star. I'm a celebrity, so I can go in and intimidate women into allowing me to assault them and assume they're not going to say anything.' That is the ultimate abuse of power. And I don't understand how anyone can remotely justify that."