Joaquin Phoenix Looks Back On His Weird Appearance With Letterman 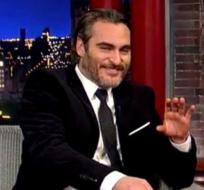 In an appearance with David Letterman last night, Joaquin Phoenix said he was slightly worried about his career after his infamous appearance on the 'Late Show' in 2009.

Phoenix revealed that Hollywood insiders knew his persona was all an act. One of Letterman's writers has previously said the host was in on it.

"They told studio executives and such. So people in the industry knew it wasn't real," said Phoenix. "But the public, they thought it was real. So there was a period... they said it was going to take a little bit of time."

"I was kind of surprised. We went into it and I didn't expect it to be so public," he admitted.

The actor also announced his engagement to his yoga instructor girlfriend after a story on their first meeting.

Letterman joked she was able to "harness his hog."

But on 'Good Morning America' on Tuesday morning, Phoenix said he had made up the entire story.