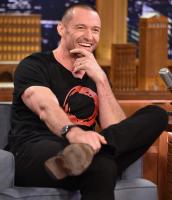 Hugh Jackman says Joan Rivers wanted him to perform at her funeral.

Jackman sang 'Quiet Please, There's A Lady On Stage' at the comedian's funeral on Sunday.

"It was amazing," Jackman said of the service. "I must admit: I've been to several funerals, and I've always kind of felt for the person who has to sing. I've always said, 'Oh, how do you do that?'"

"But at her funeral, when Joan Rivers asks you to perform, just answer. She had planned everything out."

"She had seen me in a show called The Boy from Oz, which I did here on Broadway. And I sang a song from that. It was called 'Quiet Please, There's A Lady On Stage.' It's a beautiful celebration of a woman, and it was for her."

"The entire audience in the synagogue got up and started clapping and cheering," he said. "The whole thing was very uplifting, very touching and moving, but funny."

Even Howard Stern, who eulogized Rivers, said he was moved by Jackman's performance.

"It was probably the most remarkable service I have ever witnessed," Stern said on his radio show. "He starts singing it quietly and part of the song is clap your hands together. He made everyone get up and start clapping their hands to the song."

"I was so f---ing moved by this guy's performance. I had tears. Now, you know me. I'm a big scumbag. I don't get moved. I appreciated this guy so much. Hugh Jackman. You know, f---ing Wolverine."