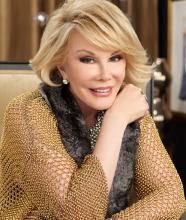 Joan Rivers went into cardiac arrest soon after her personal doctor began performing a biopsy on her vocal cords -- a procedure that experts say should've only been done in hospital.

But now it has also emerged that the doctor, who has not been publicly identified, took a selfie of himself with Rivers in the procedure room while the comedian was under anesthesia.

The 81-year-old was in the clinic for a scheduled endoscopy with Dr. Lawrence Cohen but after the doctor noticed "something" on the her vocal cords, Rivers' personal doctor stepped in to perform a biopsy without her prior consent.

It is believed the unplanned biopsy caused Rivers' vocal chords to seize — a condition doctors call a laryngospasm — cutting off her oxygen to her lungs which led to the caridac arrest.

Many observers have pointed out that Dr. Cohen shouldn't have let Rivers' personal doctor to use their instruments or perform the procedure at his clinic.

Cohen has since stepped away, at least for the time being. Yorkville Endoscopy says he "is not currently performing procedures... nor is he currently serving as medical director."