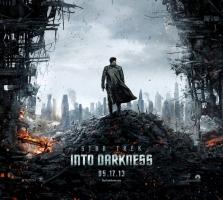 After the wife of a man dying of cancer shared his story online, the usually secretive JJ Abrams screened an early cut of the film for the fan who has only weeks to live.

"My amazing healthy film buff husband diagnosed with leukemia at 38 had to endure 3 rounds of chemo before they found a bone marrow donor match," Daniel's wife wrote in a posting.

"He is now ravaged by a new, totally unrelated cancer. There is nothing left to do but make him comfortable. He has weeks to live."

She wrote that they went to watch The Hobbit hoping to see the first nine minutes of Star Trek playing before the film. But when they eventually got to see The Hobbit, there was no Star Trek preview.

"We, his friends and family, the love of my life—would love him to be able to see the Star Trek movie but even the 10 minutes of the trailer would be amazing," she said.

After word of her plea reached Paramount and Abrams, the studio arranged a special screening for the couple -- with the official release still months away.

"We are of course sworn to secrecy, but we are officially allowed to say we saw it and we enjoyed it immensely as a film and as a gesture," his wife says. "It was truly amazing that a filmmaker so secretive as JJ Abrams was kind enough to show this to us."

"This is also so poignant as JJ Abrams took so much care in the first Star Trek movie to at least try to get everything 'right' for the fans and we were so touched when he was concerned that we wouldn't 100% enjoy the screening as it's still being worked on... Be assured we enjoyed it 110%!"

To their credit, Paramount and Abrams haven't so much as released a statement to try to capitalize on the good deed.