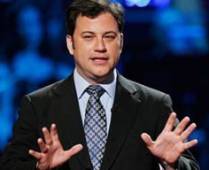 A star-studded event that is attended by the President and First Lady as well as other senior members of the staff, the event features a barrage of zingers aimed at those in Washington.

"We are thrilled that Jimmy has accepted our invitation to be the featured comedian at our annual dinner."

Kimmel joins Jay Leno, Stephen Colbert, Jon Stewart, Wanda Sykes, Conan O'Brien and Craig Ferguson as those who have been selected to host the event in its history.

Seth Meyers hosted the dinner last year and drew praise for stinging zingers at everyone from Barack Obama to Donald Trump.

For his part, Kimmel says he can't wait for the event.

"I look forward to being a part of the White House Correspondents' Association Dinner," says the late night host. "I love dinner."