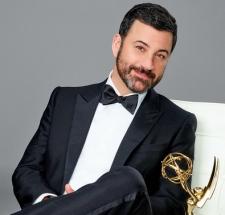 In his second stint as host, Jimmy Kimmel opens the primetime Emmys looking for a ride from one of his celebrity friends to reach the show.

"If it weren't for television, would Donald Trump be running for president? No," Kimmel said. "He would be at home right now quietly rubbing up against his wife, Malaria, while she pretends to be asleep."

Kimmel then wondered who should be blamed for the Trump phenomenon.

"That's right. That guy. Mark Burnett, the man who brought us 'Celebrity Apprentice,'" Kimmel said. "Thanks to Mark Burnett, we don't have to watch reality shows anymore, because we're living in one. Thank you, Mark."

He then nominated Burnett to be the first one thrown over the wall if Trump actually builds it on Mexican border.

"This year's nominees are the most diverse ever," he said. "And here in Hollywood, the only thing we value more than diversity is congratulating ourselves on how much we value diversity."