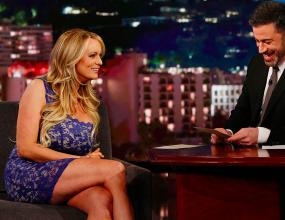 Stormy Daniels talks about the press release that came out on Monday saying that the affair with Donald Trump never happened, admitting she had nothing to do with it.

"I thought this was a talk show, not a horror movie," she jokes.

She also weighs in on what she thought about Trump bringing the three women who accused Bill Clinton of inappropriate sexual behavior to a debate with Hillary Clinton and plays a round of 'Never Have I Ever'.