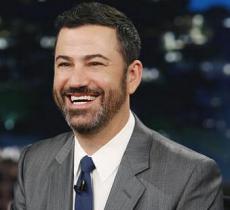 It was quite the start of the week for Jimmy Kimmel as he announced he would be hosting the 89th Academy Awards in February and that wife Molly McNearney is pregnant with their second child.

"My wife is hosting a baby inside her body, so that's what's coming," he joked during his show.

"We got the ultrasound, which is weird because it's like you're already spying on the baby—but we asked the technician not to tell us whether we're having a boy or a girl. Our plan is to let the child decide for itself."

"We want that to be a surprise, but I have been trying to think of names that would work for a boy or girl. So far, all I've come up with is Dyson, after the vacuum, or Jelatin with a 'J'. No? That's exactly what my wife said."

"So, there's a lot of exciting stuff going on. Congratulations to me. I'm hosting the Oscars and I had sex. Two things as a teenage boy I never thought would be possible," he quipped.

Kimmel and McNearney, a writer on his show, tied the knot in back in July 2013. Kimmel also has an adult son and daughter from his first marriage.