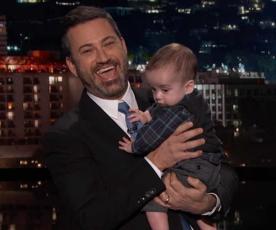 Kimmel brought Billy to show everyone how well he is doing and thanked the staff at Children's Hospital LA.

The late night host also took the chance to tell his viewers about the program CHIP (Children’s Health Insurance Program), which is threatened sine it's being used as a bargaining chip in the Republican tax plan.

"Parents of children with cancer, diabetes and heart problems are about to get letters saying their coverage could be cut off next month. Merry Christmas, right?," says Kimmel. "This is literally a life and death program for American kids. It's always had bipartisan support, but this year, they let the money for it expire while they work on getting tax cuts for their millionaire and billionaire donors."

"Imagine getting that letter, not knowing to you'll be able to afford to save your children's life. This is not a hypothetical; about 2 million CHIP kids have serious chronic conditions. I don't know about you but I've had enough of this. I don't know what could be more disgusting than putting a tax cut that mostly goes to the rich ahead of the lives of children."

"Daddy cries on TV but Billy doesn't. It's unbelievable," he jokes.