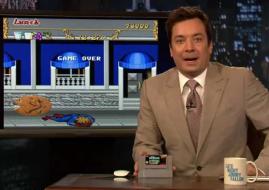 After Apple's unveiling of the iPhone 5S and the less expensive 5C, Jimmy Fallon weighs the good and the bad of buying the new gadget.

"Pro: Dropping $400 on the most advanced phone on the market," Fallon begins. "Con: Dropping it in the toilet five minutes later."

"Pro: The home screen will include a fingerprint for security. Now if someone steals your iPhone, there's a good chance they'll also chop off one of your thumbs."