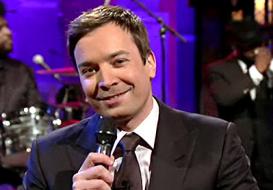 Jimmy Fallon finally made his debut as the host of NBC's 'Late Night', and as the show opened in Fallon's dressing room, Conan O'Brien was still packing up.

"You probably want privacy right now, but I just haven't had time to clean out my dressing room," said Conan.

"I'm about to start my first show," Fallon told him eagerly. "Oh, is that tonight?," O'Brien asked. "I was gonna TiVo it, or something."

O'Brien bit was followed by a somewhat disjointed monologue, which should get better as the weeks go on: "New York City was hit with a huge snow storm... and I woke up this morning and said, `Please, let it be a snow day! Please!'"

The monologue was followed by a clever 'Slow Jam' presentation of the news performed in part by the houseband (the Roots) and a game-show spoof called 'Lick It For Ten', in which three contestants could win $10 by licking a surprise item, such as a lawn mower, photocopier or a bowl of goldfish.

As Robert De Niro, the show's first guest came on, he was ready to joked about his reputation as a difficult interview.

"I wrote some questions with one-word answers," Fallon said. Consulting his list, he asked, "How are you?"

"Are you happy to be here?," asked Fallon.

Fallon also did his De Niro impression, while De Niro tried his hand at an impression of Jimmy Fallon.

Justin Timberlake was next with a short appearance to promote his new reality series, and finally a performance by Van Morrison.

And that's how Fallon began his first show. It certainly was no masterpiece but a solid debut night, which should only get better. And, hey, if it doesn't work out, as Lorne Michaels joked you can always 'blame the economy.

Conan O'Brien will make his 'Tonight' debut in June, as Leno moves over to his new prime-time 10 PM show beginning in the fall.