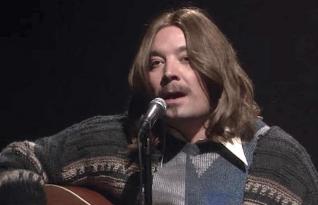 Jimmy Fallon's James Taylor debuts 'Fire and Fury', a parody of his classic 'Fire and Rain' that takes on the infamous book.

"Just yesterday morning, Breitbart announced you were gone. Bannon, the tell-all book put an end to you. Thought you were besties, but I guess I was wrong," he sings.

"Shouldn't have dissed Trump’s ass in those interviews. I've seen fire and I've seen fury. I've seen White House staff who will have to face a jury."

"I've seen him drink a cup of water with tiny hands, While he's lyin' in bed watching 'Fox and Friends'. Bannon hated Don Jr., for disrupting his plans, Called him unpatriotic and treasonous."

"Trump heard about that, and Bannon got canned, Cuz Trump's, like, a really smart stable genius."

"Whoa, I've seen fire and I've seen fury, I've seen so many tweets that my eyes are getting blurry. Even his own wife and kids thought he would lose, Now he's throwin' a damn awards show for fake news."