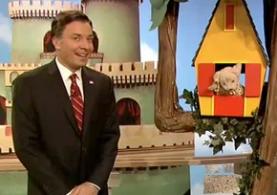 Fallon's Romney begins by getting his shoes shined and explaining the concept of a wallet and money.

"Do you know what money is?," he asks. "I'm guessing no, because you're watching public television."

He then welcomes "special friend" Obama, who says Michelle has him picking up new job skills working as a mailman after his debate performance -- which also helps as an example for the word "choke."

When Obama explains he's hoping for a second term, Romney jokes his friend is using something called his imagination.

He then invites viewers to his world of make-believe as he ties up his dog to the hood of his train.

That's when Fallon gets in a couple of shots at Romney remarking it's the magical world where children can encounter things that aren't real like a talking cat, his tax returns and where he and Paul Ryan find most of their facts.

"Before we go, remember there's only one person in world like you. People can like you exactly the way you are but if they don't then just pretend to be the exact opposite of who you are and then maybe they'll like you," quips Fallon, obviously referencing Romney at the debate.