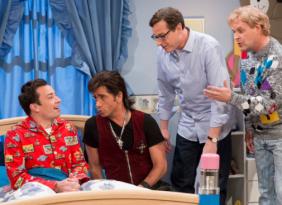 Jimmy Fallon's Donald Trump has a heart-to-heart conversation with the 'Full House' cast in anticipation of the upcoming 'Fuller House'.

Trump is worried that he will be called a "loser" if he loses the election but the family jumps in to offer him support.

The skit is filled with references the 90s sitcom and even some useful advice.

"You guys are right. I have to stay in the race," says Trump. "Otherwise a Clinton will be in the White House again. I mean see something from the 90s come back in 2016."

When Kimmy Gibbler makes an appearance, he says: "I know how we can keep her out. We need to build a giant wall. No more Gilbblers until we figure out what's going on and we make her pay for it."

John Stamos' Uncle Jesse even offers his advice for the campaign: "You see, Donald, that's just it. If you really want to make America great again, you have to bring people together, not push them apart."

"We may have disagreements from time to time but, at the end of the day, we all love each other. That's what family is about. Gosh darn it, that's what America is about."

"Jess, that might be the most romantic thing you've ever said," replies Lori Loughlin as they go in for a kiss.

The cast sings the 'Full House' theme to close things out.