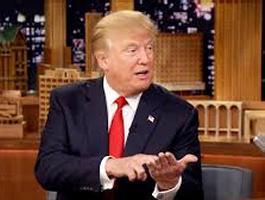 Jimmy Fallon is responding to critics who thought he went too easy on Donald Trump last week.

Fallon was mocked by fans for giving Trump a platform without asking more pressing questions of the Republican nominee or bringing up any of his more controversial statements.

Fans said he chose to run his hand though Trump's hair rather than ask any of the tough questions.

"Have you seen my show? I'm never too hard on anyone," Fallon tells TMZ.

He says Trump was a "good sport" and says he tries to stay away from his political views on 'The Tonight Show'.

"Just get out there and vote. Everyone just vote, vote, vote," he says.

At the end of Hillary Clinton's appearance on 'The Tonight Show' Monday night, Fallon joked he had a gift for her: a bag of softballs.

"That's what I gave him. I'll give them to you later in the evening."