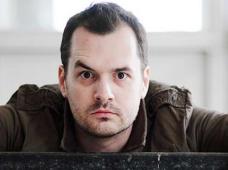 Jim Jefferies tells Conan O'Brien how he got Brad Pitt to be his Weatherman.

Jefferies says Pitt called asking him if he could be on his show and the comedian offered him the part.

He adds that the show pays him the SAG minimum of $400 per episode so he's certainly not doing it for the money.