Jim Cramer To Debate Jon Stewart On 'The Daily Show' 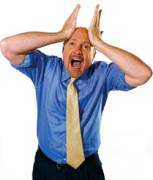 Jon Stewart and Jim Cramer's back-and-forth that has turned into a full-blown media feud will finally come to a head on Thursday, when the stock analyst makes a stop on 'The Daily Show'.

It all began when Jon Stewart highlighted Jim Cramer's advice to a viewer that he shouldn't move money from Bear Stearns, telling him it was "not in trouble" days before its collapse.

Cramer then dismissed Stewart as a 'comedian' and Stewart didn't take too kindly to his show being called a mere 'variety show'.

"You make me sound like I'm some kind of buffoon, just flapping my arms with crazy buttons and wacky sound effects," said Stewart as he cut to a clip of Cramer on his CNBC show 'Mad Money', punching buttons that make strange sound effects. Ouch.

The squabble between the two television personalities has in many ways turned into a larger debate raging about whether the media is doing an adequate job covering the economic reality so it should make for an entertaining segment.