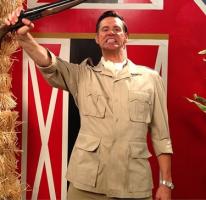 Jim Carrey is speaking out about the release of ex-girlfriend Cathriona White's suicide note, in which she apologized to the actor.

The 30-year-old White was found dead in her home in September 2015.

"I can go on brokenhearted and try to put the pieces back," she wrote. "I could, I just don't have the will this time. I'm sorry you felt I wasn't there for you. I tried to give you my best part."

Carrey is furious that the coroner decided to release the 28-year-old's private note to the public. He writes in a statement:

"When I came to Hollywood to make it as a comedian, I soon learned that the details of my private life would be handed out to the media like free dinner vouchers. I never dreamed that the people I love most in the world would also be on the menu. What a shame.

Carrey and White first met in 2012 and dated on an off until they ended their relationship a few days before her death.