Jim Carrey: It Was A Great Character But It's Not Me Anymore 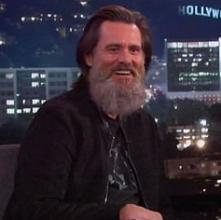 Jim Carrey talks about how his life has changed since he walked away from the spotlight and how his beard has taken on a life of its own.

"Don't get me wrong, Jim Carrey is a great character and I was lucky to get the part," he says. "But I don't think of that as me anymore. Not really."

"Everywhere I go people are talking about the beard. It's like they can't really think about anything else," he says. "Like it's just not cohesive, there's something a bit different about me and it's that damn beard. And wherever I show up it becomes the story. It's a bigger star than me at this point."

"I think it's a balance thing. So if I ever shave my face again, you'll know," he quips. "There's a full beard somewhere."