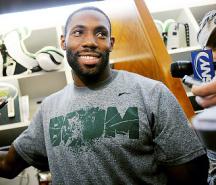 This after the 27-year-old was approached by a TV production company that wanted to create a reality show about the clan "trying to co-exist as a modern family," according to the New York Post.

The paper says most of Cromartie's women, who have become friends so their children can bond with their half-siblings, wanted to do the show but he wasn't interested.

Cromartie apparently wants to stay out of the spotlight while the mothers see this as an opportunity to earn a living and "document their journey."

Cromartie signed a four-year, $32 million contract last fall. He reportedly pays $3,500 a month to each woman.

The NFL player famously couldn't remember the number and names of his children -- then eight of them -- on HBO's 'Hard Knocks' in 2010.