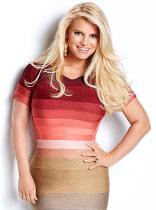 ) drunk during her appearance on HSN? That's what many viewers are saying after watching the singer slurring her words and swaying while rambling about her sister Ashlee Simpson on the Home Shopping Network.

The mom-of-two appeared unsteady on her feet as she joined host Colleen Lopez for the two-hour appearance.

"Ashlee is like the best at wearing gray," she said. "My sister. Like, she's very rock 'n roll, but there's something about a gray that's, like, sexy."

"Maybe it's her and her husband Evan Ross, they share jeans, I have no idea. I don't know. There's just something hot about them."

Simpson was making her HSN debut, showing off her Jessica Simpson 10th Anniversary Collection. The focus quickly came on Simpson instead of the collection but that didn't appear to dampen sales and the antics may have even got a few more to tune in.